DONATE
News Articles
Home News Articles The Abraham Accords, an Open Door to a New Era of Cooperation and Friendship

The Abraham Accords, an Open Door to a New Era of Cooperation and Friendship

A Vision of Peace

An unexpected breath of fresh air blew into Durham from Sharaka, an organization based on “people to people” diplomacy. The Abraham Accords between Israel, UAE and Bahrain broke a long-standing barrier to normalizing relations.

Sharaka, which means “partnership,” was founded by young leaders from Israel and the Gulf nations in order to turn the vision of people-to-people peace into a reality.

The delegation included representatives from Bahrain, Egypt, Israel and Saudi Arabia. Anat Sultan-Dadon, Consul General of Israel to the Southeastern United States, came to Durham and Raleigh to affirm Israel’s commitment to peace. It was historical. It brought hope for the future.

What has changed? Is this a realignment of values? How did the landscape shift from a generation consumed with hatred into a generation eager to engage?

According to a panel of speakers at the “Jewish For Good” community center, millennials are charting a different course for the Middle East. The panel framed the Palestinian movement as an “Incitement” effort. Citing Iranian terrorism, one panel member addressed the shared security concerns between Israel and the Gulf nations. A new nationalist pride has replaced the old monolithic response to hating Israel. The panel contended the future lies in ideas such as collaborating in water technology, and exploring other opportunities to move the Middle East on a better path.

A Tree Grows in Durham

Dr. Najat Al Saeed, a Saudi author, expressed the curiosity she saw in a Middle East student. The student was anxious to connect with the outside Jewish community. This led some to speculate that our Jewish community might consider creating a Zionist/Muslim space on campuses.

What was the most joyful part of the evening? When the panelists declared Israel the friendliest country they’d visited. “We were treated like rock stars everywhere we went. We were invited to strangers’ houses for Shabbat. Everyone wanted to take selfies with us. We can’t wait to go back”.

The following day, Durham’s Mayor Pro Temp Mark-Anthony Middleton and Anat Sultan-Dadon, Consul General exchanged documents commemorating a tree planting and the Abraham Accords. They addressed the group saying, “As these leaves spring up in years to come, may our children look at them and be reminded that we made a choice to plant together, to put our hands together for a common cause and promote peace”.

While this does not reverse Durham’s BDS resolution from 2018, it’s a good first step. 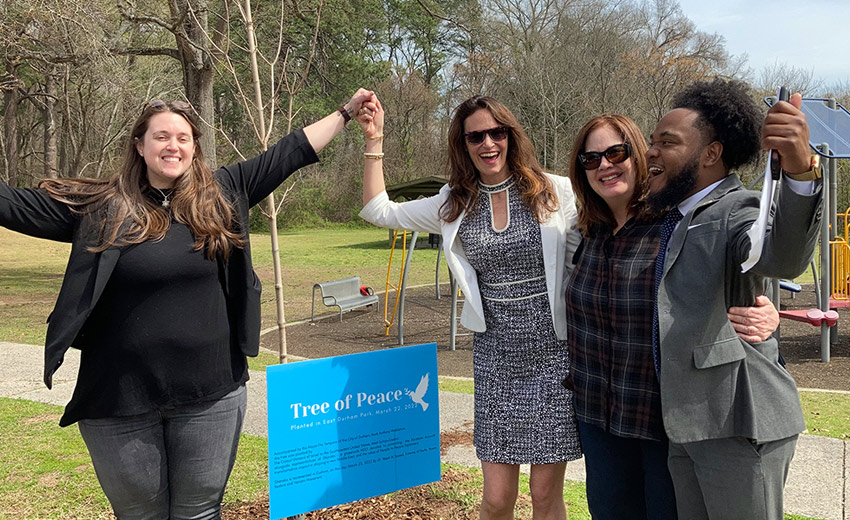