NCCI members were thrilled to travel to Israel for the Zionist Organization of America’s Yom Yerushalayim Leadership Mission in late May. We learned things you don’t see in the media—mainstream or Jewish—that we think our readers need to know.

The most important point involves the ongoing encroachment onto Israeli land. NCCI supporters know that when Israel was established in 1948, Jordan attacked and took the land of Judea and Samaria, expelling Jews who had lived there for generations, destroying synagogues and gravesites. Jordan attacked Israel again in 1967, and this time Israel won back the lands of Judea and Samaria. Israel could have taken control of all that area then, but instead chose to follow UN Resolution 242, intent on trading land for peace. After this, the Oslo Accords in 1993 established areas of Muslim and Jewish settlement. Areas A would be for Muslim communities, B would be joint control, and C would be for Jewish communities.

Who Is Grabbing Israeli Land?

So, what is happening to the territory of Area C? Slowly, the land is being taken over by Muslim Arabs and Bedouins. The Palestinian Authority (PA) will place water tanks where they want Bedouins to move in area C. Then, often during Jewish holidays, they will quickly build a school and claim to the world that they had lived there for generations. NGOs and the European Union, ever the home for Jew haters, willingly go along with the schemes and fund these efforts to destroy Israel. The Israeli government has determined that these Muslim/Bedouin settlements are illegal, but they haven’t shown the political will to do anything about it yet. Readers can learn more on the Regavim website.

There was so much more to the trip, including a very special visit to Hebron, at the Tomb of the Patriarchs and Matriarchs. On that same day, we visited Oz Vegaon Nature Reserve, founded by the Women in Green in response to the murder of three Jewish teens by Arab terrorists. The speaker informed us that some Israeli students are sent to listen to PA propaganda, but others are dedicated to the survival of Israel through the Sovereignty Movement.

The Jerusalem Post’s Khaled Abu Toameh spoke to the group. He described “Palestine TV” as a 24/7 venue for constant anti-Israel and anti-Jewish messaging.

Despite the challenges we observed, it was uplifting to participate in Israel’s annual Yom Yerushalayim parade, which celebrates the reunification of Jerusalem. The international press highlighted a few bad actors who were fighting, but those of us who attended witnessed tens of thousands of happy young people singing, dancing, and waving Israeli flags in celebration of their country.

We are very grateful to ZOA for all the work they do to educate us and all the world about Israel and the challenges it faces. 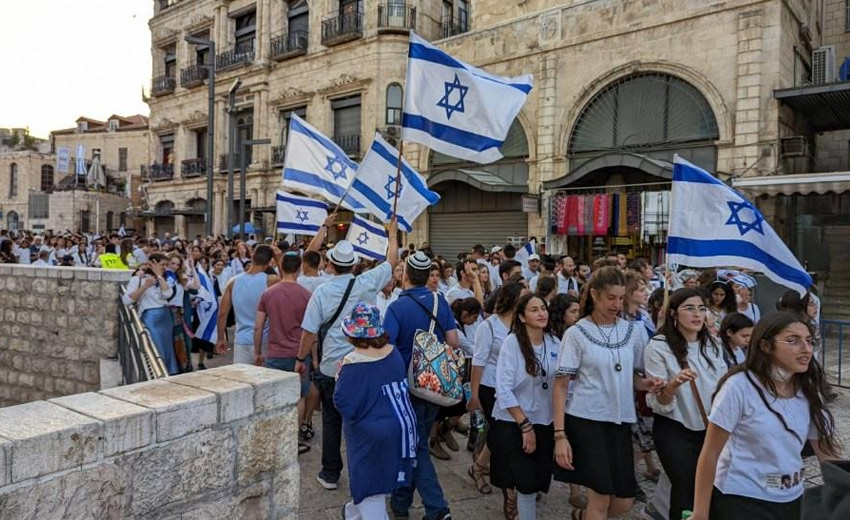